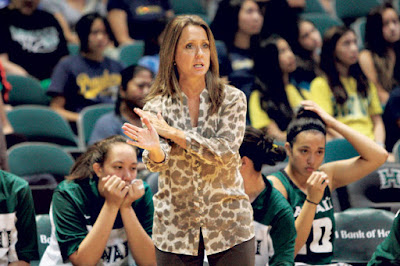 The 2019-20 season of the University of Hawaii women's basketball program will be the eighth season under head coach Laura Beeman. She and her staff have revitalized the program, leading the Rainbow Wahine to their first conference title since 1997-98 with the 2015 Big West regular season championship, and the program’s first NCAA Tournament berth since 1998 following its 2016 Big West Tournament championship. Before reaching the 2016 NCAA Tournament, Hawaii advanced to the Women’s National Invitational Tournament in three-straight years from 2013-15, plus an additional appearance in 2019. Under Beeman’s reign, UH has notched four different national postseason appearances.

Laura picked up her 100th career victory at UH with a 59-54 win over Cal State Fullerton on February 8, 2018. While accomplishing career win No. 500 on Feb. 7th, 2019 in a 70-68 victory at UC Irvine. Prior to Hawaii she was at Southern California as the associate head coach under Michael Cooper where they re-established the Women of Troy as a PAC-12 power. Just this year she was inducted into the California Community College Hall of Fame for her time at Mt. San Antonio College.

We are proud and honored to have Coach Beeman on our team of subscribers! Our subscribers know that great leaders never stop learning and they never stop reading. They realize that for less than most people's monthly cable bill they can receive a year's worth of information that will make them better leaders, coaches and administrators.

We would love to have you on the team!