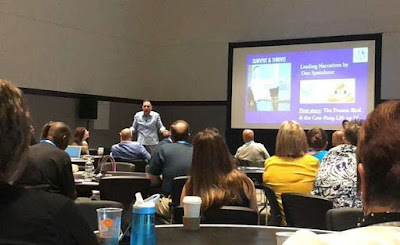 Dan Spainhour's latest book Leading Narratives was used as a resource at the National Principal's conference in Boston. Many thanks to presenter Andrew Marotta @MarottaAndrew for including us!

Leading Narratives is the latest book from Dan Spainhour. The book contains his collection of stories and parables that he has used during his 34 years as an athletic professional. Each story ends with a moral and lesson for leaders to impart to the people they are leading. 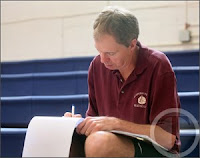 Dan Spainhour on the book

​​A huge part of my coaching foundation was formed when as a very young coach, I got the opportunity to work the Duke Basketball Camp. My first year was the summer following Coach Mike Krzyzewski’s third season at Duke which saw his team finish 11-17—his second consecutive losing season. At that time there were lots of rumblings about how long it was going to be before he was fired. I’m sure Coach felt pressure but he never showed it. On the last night of camp we always had a pizza party with Coach K. We sat around talking hoops, discussed coaching philosophy and there was always the occasional BS story thrown in. I distinctly remember Coach K saying that coaching is as much about choosing words as it is about coaching strategies. He said you must know your team and you must tell vivid stories—stories that not only make people think but make them feel the way you want them to feel. Little did I know that I was receiving advice from an hall-of-fame coach who would go on to become a legend and the winningest college basketball coach ever.

​I don’t think it is a coincidence that the greatest leaders teach with stories. I think everyone needs a good story to tell and thanks to Coach K, I became very interested in learning what parables or interesting stories I could use to teach lessons to my team. Here are some I have collected from 34 years in the business.  I will admit that some stories may be a little edgy and may not be considered “politically correct” by some but I chose to include all that I had in my collection. I hope no one is offended and that you enjoy them!

The book is available from our website & any place books are sold.
at August 30, 2019